Hi ya’ll. Do you know of a good piece of software for converting text to speech? I used to have a brilliant one years ago where you could set pitch, tempo, male/female/robot characteristics and so on, and it would render to wave. I forget what it was called. Any clues?

Nice tip, but I don’t actually don’t need anything that comprehensive (no need to make a full, sung vocal track this way, although that could’ve been fun).

I also forgot to mention that it should be free or nearly so.

I found it funny that someone named Sam asked that question, since there is a software for Commodore 64 (and other old platforms I think) that is called just that - S.A.M. - Software Automatic Mouth.

I was just going to post that. It seems to be the only one that fits his description.

I found it funny that someone named Sam asked that question, since there is a software for Commodore 64 (and other old platforms I think) that is called just that - S.A.M. - Software Automatic Mouth.

Yes! That’s the one. But I’ll check out the other suggestions as well. Thanks a lot all of you!

I’ve used this one before http://www.voiceforge.com/demo it has lot’s of voices but has a limit on size of text. though I’ve seen this one talkany recommended before many times http://www.groovekitten.co.uk/#/talkany/4508182908

Well, having become reacquainted with AnalogX Sayit, I can say that it’s a bit crap. So, thanks again for all your good suggestions.

Another nice free one with Wav export is Speakonia for Windows XP.
http://www.cfs-technologies.com/home/?id=1.4
Pitch, Speed, and Volume control too.

Or you can get an Amiga and use “some” workbench versions, since there is a program in there that will let you do that (Say).
Maybe it will work through UAE as well, haven’t tried it.

If you’re after realism I can only point you to the AT&T “Naturally Speaking” voices, they’re pretty good.

There are open-source projects with similar goals. I can’t recall the names right now, there was a very good free one made by researchers that even did a variety of accents, I think it may have been called eSpeak.

Anyway I went on a TTS rampage a few years ago and tried everything I could get my hands on. I’ve forgotten more about this stuff than most ppl can be bothered to learn!

But for my purposes a few years ago – I wanted rougher, copmuter-sounding voices – I discovered that the OS X voices can do waaaaaay more than their usual presentation suggests, especially using a developer tool called Repeat After Me, which can be tricky but if used well can impart almost any kind of enunciation or inflection or other effect onto what you want the computer to say, including making them sing. After exploring at least dozen options I realized it was the best for what I wanted to do. Repeat After Me is bloody amazing and makes the Apple voices a serious creative tool in their own right.

Then I gave up OS X and moved back to Windows and discovered to my joy that you can use old Apple OS 6 and 7 emulators to access the older Apple voices (all the voices up to Fred, Victoria, etc). Then I learned the inline commands to customize how they sound and away I went, if you’re patient you can do an awful lot with them, even though the software’s so old. Make them sing, enunciate how you want, drag out or shorten syllables, make them sound like some terrible future AI on the fritz (my goal at the time), all kinds of stuff. I mainly used an emulator called Basilisk and sample the voices with SoundLeech. It can’t do near what Repeat After Me can, but the inline commands could do enough for what I wanted.

If I think of it later today I’ll dig through all the old bookmarks I have on the subject and post useful stuff. I could use a refresher, been thinking I need some old Apple voices for a new project.

Edit: here at least is the scripting guide for the old voices you need an emulator for, and a bunch of other info: https://developer.apple.com/legacy/library/documentation/mac/pdf/Sound/pdf.html

…and this for more recent versions (OSX): https://developer.apple.com/library/mac/documentation/UserExperience/Conceptual/SpeechSynthesisProgrammingGuide/FineTuning/FineTuning.html

…also, if you want to spend money, I think Plogue’s Chipspeech VST is quite good.

If you want something “new” real retro, I can recommend this one: 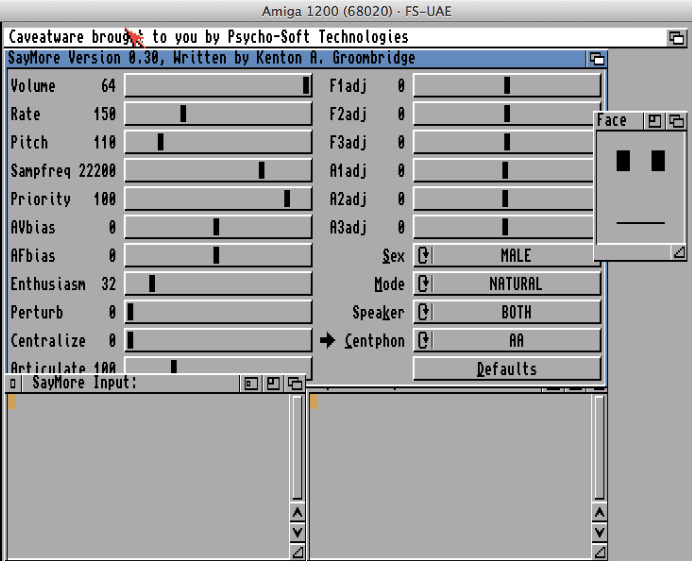 For my tune “My Atari” I used speech.tos running on Hatari Atari ST emulator…

For my tune “My Atari” I used speech.tos running on Hatari Atari ST emulator…

Nice video and beginning, but suddenly some loud bass spike appears… Why did you add this? I completely ruins the song…