It’s certainly been a while since I’ve considered mucking around with sample loop positions however I was recently encouraged that I can script moving the selected_sample.loop_start and selected_sample.loop_end positions around during playback with Renoise 3.1.1. The script certainly changes the loop_start and loop_end positions as expected, however because I’m using a while loop for crude modulation eventually renoise pauses the script and asks the user if it should keep running.

I’m not hoping to run a script continuously - I’ve read that I shouldn’t expect to be able to do anything real-time with scripts. I’m wondering if I might be able to add a sample modulation set item that interacts with loop_start and loop_end. If such a thing is possible for a renoise tool I’ll dive into that for a first renoise tool project! (after a long hiatus)

Thank you for the extensive API!

(and thanks taktik for com.renoise.ExampleToolSlicedProcess)

I’m still just scratching the surface however I’ve added some rudimentary pitch control in addition to the usual loose mode. Plenty more to do, including possibly becoming zero-crossing aware in some way. 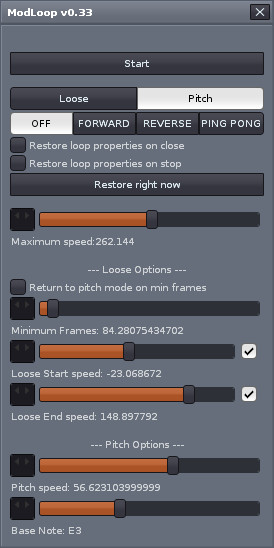 There is still plenty to do, but in it’s current incarnation it has preferences and midi mapping. I’ll likely work on dealing with pitch changing when there is a high loop position velocity and possibly looking at the sample buffer a little bit to make some judgements about zero crossings. Not to mention additional ways of modifying the loop, such as random locations, finer control over pitch, and ways of handling edges. Also now that I’m thinking about it, there are additional constraints I should place on it’s operation for cases like the sample being too small.

I’m using some lua functions for mapping a midi note number to a frequency that I copied from somewhere else and it occurs to me that the same functions probably already exist in renoise, I just have not found them yet.

This has filled up my downtime on my winter holiday quite sufficiently! Thanks again for the awesome API.

Edit: The above screenshot is likely the newest version. This thread continued here.