edit: Looking for a version that works with Renoise 2.8 or even just Cells! 2.0? See here

Cells! is an add-on for Renoise 2.7 Renoise 2.8 that turns the cross-platform audio tracker into an real-time performance tool. It supports the triggering of audio loops and samples, complete with per track ‘DJ-style’ effects (bass kill, filter etc.) all quantized in time to the current tempo. It supports multiple outputs to separate the main playback output and cue output. Emphasis is strongly upon the live performance aspects. 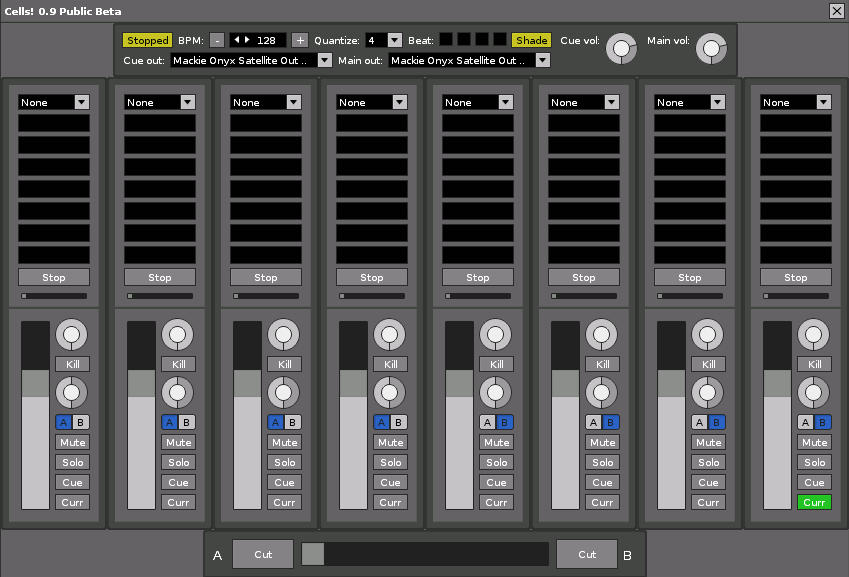 Samples are stored in instruments and can be loaded / unloaded while Cells! is running with no errors
Cells can be either one-shot or looping playback mode
Crossfader for mixing between ‘A’ and ‘B’ sources
Crossfader cut buttons (non-latching) for ‘DJ-style’ cuts and drops
Main playback and cue output volume controls
BPM control
Tempo nudge up and down for mixing into/out of other sources
Extensive midi maps (over 230 functions and counting)
User specified number of tracks (6 to 16 tracks; default of 8)
User specified number of cells per track (6 to 16 cells per track; default of 8)

Despite the large feature list, Cells! remains CPU efficient. To give you an idea of how well it works: I can run 12 tracks of Cells! in realtime on an Atom netbook with only 512mb of ram and using the internal sound card. This was on the Linux version of Renoise.

It is strongly recommended that you read the manual.

During the private beta testing phase, most of the major bugs have been found and fixed. However, you may still make Cells! crash. If you do so, please supply the following details:

Thank you, and please post all feedback during this beta phase within this thread.

Edit: encountered this error on startup (tool just installed, selected ‘Prepare’ from the menu). Running Renoise 2.7.1, details are in my sig.

This is looking great! Can’t wait to try it out! Big thanks!
I’m still amazed by the creative minds of Renoise’s users, and the amount of love you show to the fellow users! You blow my mind!

So cool…can’t wait to try this out

[quote=“danoise, post:2, topic:34414”]
encountered this error on startup (tool just installed, selected ‘Prepare’ from the menu). Running Renoise 2.7.1, details are in my sig.

[quote=“danoise, post:2, topic:34414”]
People are too busy downloading your tool and making DJ mixes to stop and say thanks or hit the +1

Edit: encountered this error on startup (tool just installed, selected ‘Prepare’ from the menu). Running Renoise 2.7.1, details are in my sig.

I wanna use it so bad!

Thank you a lot !

Ok…I readed the manual, mapped my controller… but I still don’t get it. How do I load samples in my tracks ? I tried to prepare…But nothing happens apparently. I’m not used to this kind of tools

I’ve been hanging out on the #renoise channel since release and loading in samples and not having them appear appears to be a common issue.

This is how it works:

Hope this helps everyone.

I will update the documentation in this respect.

edit: added that is cannot be a sliced sample.

One more little suggestion: It would be great if the crossfader would be set to the middle on startup. This has confused me quite some times now (tracks “not working” and all that!)

Fun fact: you can “abuse” the cue button as an FX send. Just set the routing of the cue channel to the master, and place the desired effects you want on the dsp chain. Instant effect on/off!

Thank you for the help.

I managed to make some noise (not music, only noise), loading samples. But everything is out of beat (and control

I 'll see that during the week end.

Thank you for the help.

I managed to make some noise (not music, only noise), loading samples. But everything is out of beat (and control

I 'll see that during the week end.

Remember that Cells! works with LPB8 so if you prepare your samples in LPB4 and then start Cells!, they will play much too fast.

Fun stuff, autoclone patterns in combination with this tool seems to work, haven’t tried recording volume/panning changes to automation yet.

But everything is out of beat (and control

you need to make sure the samples/loops you’re using are cut properly and synced to the correct values in the instrument settings.

totally addicting! …works great in a freeflow setup :] , and this is only 0.9

Sick I can’t wait to get dirty with this one!

I won’t have time to try this out till tomorrow but huge respect for mxb!

Man that is so awesome. Thank you so much for your hard work, and all the other coders who make tools for this awesome piece of software. Renoise is fast becoming my favorite DAW. Renoise is by far the most unique DAW on the market. There’s so much to offer here. The ability for the community to design Tools has really made this software come alive in my opinion. Truly a composers tool, and not just for Producers. Your software and your community rocks, keep up the great work!!