When I make a MIDI mapping I want to be able to chose “any” channel, instead of a fixed (like in the picture). Basically I want to keep the slider of my controller mapped to the same parameter, when switching through banks/channels. 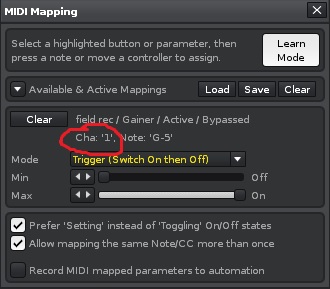 Is there really no workaround or tool for this? I’ve some buttons on my controller to control stop/play the song, loop section on/off, … But when I switch banks/channels (to trigger other instruments of DSP’s) I can’t use those buttons for that any more, since they’re already mapped to channel 1.

With the MIDI tap for instruments you can choose between any or a fixed channel. So why not in the MIDI mappings dialog? Would make Renoise a powerful tool for live performing too.

Strangely enough, I think you’re the first one to point it out. But it makes perfect sense to have this as a native feature.

And yes, it can worked around using tools. But the one I’m thinking of (Duplex) does seem like overkill for this particular scenario.

So, I’ve actually started working on a MIDI remapping tool which would enable this sort of thing - while still being light on CPU and everything.

The idea is to rewrite incoming MIDI on the fly, using “rules” like this one:

THEN set channel to 1

In theory, you could even produce a rule which would broadcast incoming message on all channels

What is particularly nice is that, with such a tool, any existing mappings should continue to work. This is so, because Renoise doesn’t really care which MIDI device the input originally came from, it just cares about the messages themselves.

I started writing the tool a couple of days ago, and there’s still some finetuning to do. Will let you know when there’s something to test.

Danoise, thanks for replying. Your tool sounds like it is what I’m looking for. Can’t wait to test it!

For my problem it’s important though that some mappings react to a specific message coming from a fixed channel (I want to be able to trigger different instruments with the button grid by switching through banks) and others just react on a specific message coming from any channel (I want some sliders and buttons to stay mapped to the same parameter while switching through banks). Hope that’s integrated into your tool and that it can be integrated into a future update.

I know Renoise is not really intended for live sets. But with a few minor things added, it could be a really powerful live tool. For example, I was really happy to see that “loop section” is MIDI mappable with the latest update.