Development of "VPDpro. Automa32". Some demonstrations

Automa32 is a window module of VPDpro multitool. It serves to create and manipulate curves and complete envelopes with up to 32 + 1 points. In this topic I will try to make some demonstrations of what Automa32 is capable of doing… 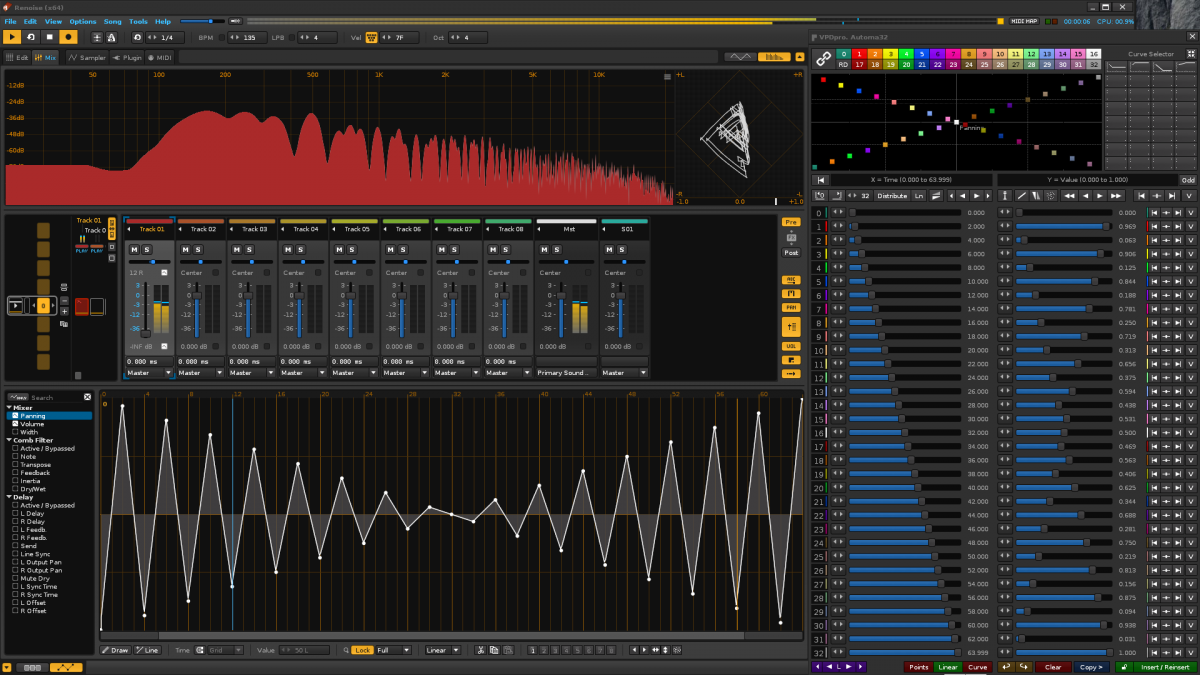 I am continuing with the development of this tool.Now it is capable of supporting curves in addition to straight lines.In addition, I have managed to integrate the import button, to be able to import from the automation editor to Automa32, and to be able to manipulate from the tool the curves already created previously.Finally, there are already 3 banks of pre-established curves prepared. Now you can support up to 96 preset curves, ready to be inserted with just 2 clicks, with the possibility of previewing before inserting.

Some examples of curves:

This closed curve is 16 + 1 points, and occupies only 16 lines.Each point falls exactly at the beginning of each line.It is possible to select a specific distribution, until the end of the pattern, or by skipping the lines between 1, 2, 4, 8 or 0.5 values.

This is another slightly more complex way to handle Automa32. It involves working with groups of buttons, adding them consecutively with a bit of scrolling. For this it is necessary to play with the bottom padlock, which protects the points already inserted.

In this case it is not strictly necessary to have the lower sliders in sight. But the user will need to know the tool to make envelopes like this well.The gray buttons on the left are used to control the “time”(X) of group points. The gray buttons on the right serve to control the “value” (Y) of group points. Always in a group of points.It is necessary to move the time 0.010 twice to be able to generate the figure in the form of an omega.

This procedure of creating the envelope is a bit more convoluted, and you need to follow the exact steps to close the curve correctly at the end of the envelope.However, if you know “the trick”, it’s pretty fast.The best of this method, at least in this case, you are creating up to 3 different envelopes in each step, being able to test them with the sound.This is the main difference to working with groups of points at once, instead of generating a small figure and then copying it repeatedly to fill in the envelope.

This is a swinging envelope with 32+1 points.

This case is simpler. A saw curve and its inverse with 16+1 points:

The preview panel shows the curve before inserting it into the automation editor, using the colored points.

Note that the tool is responsible for correctly closing the end of the envelope! All points are integer times (without decimals), minus the ending point, which ends in x.999.The end point is always a special case in programming.

Wow! I have been able to add a small horizontal slider to attenuate curves in real time and a button to clean leftover values from right to left, so that it is possible to create all tiop of curves.

This is a typical example of what a preset envelope could be: 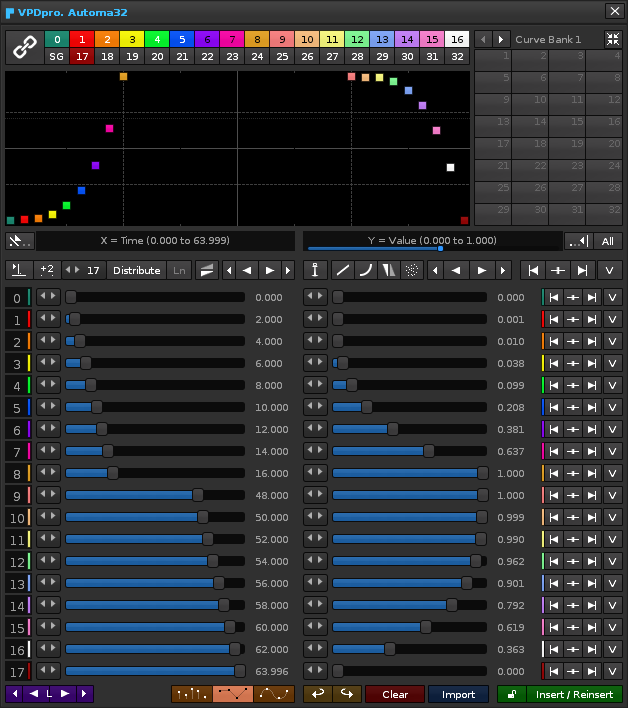 The curve inserted in the automation editor would look like this:

It is necessary to work in sections. To do this, the first curve on the left has been created from Automa32 and inserted into the automation editor. Then this curve has been transferred to the end, rotated, and inserted, all from Automa32. These 2 operations leave the envelope in the automation editor ready. Finally, you import the complete envelope (import button) to have it inside Automa32, to be able to manipulate it again.

All these operations are achieved without using the lower sliders of each point, Only the gray buttons in the center of the tool have been used, along with the slim curve attenuator.

With Automa32 it is possible to achieve precision in the strokes. The initial curve and the final curve are exactly the same, inverted!This tool starts to be really useful and fast…

Automa32 is practically refined (completed the period to eliminate errors). The final aspect along with the rest of VPDpro windows in compact mode: 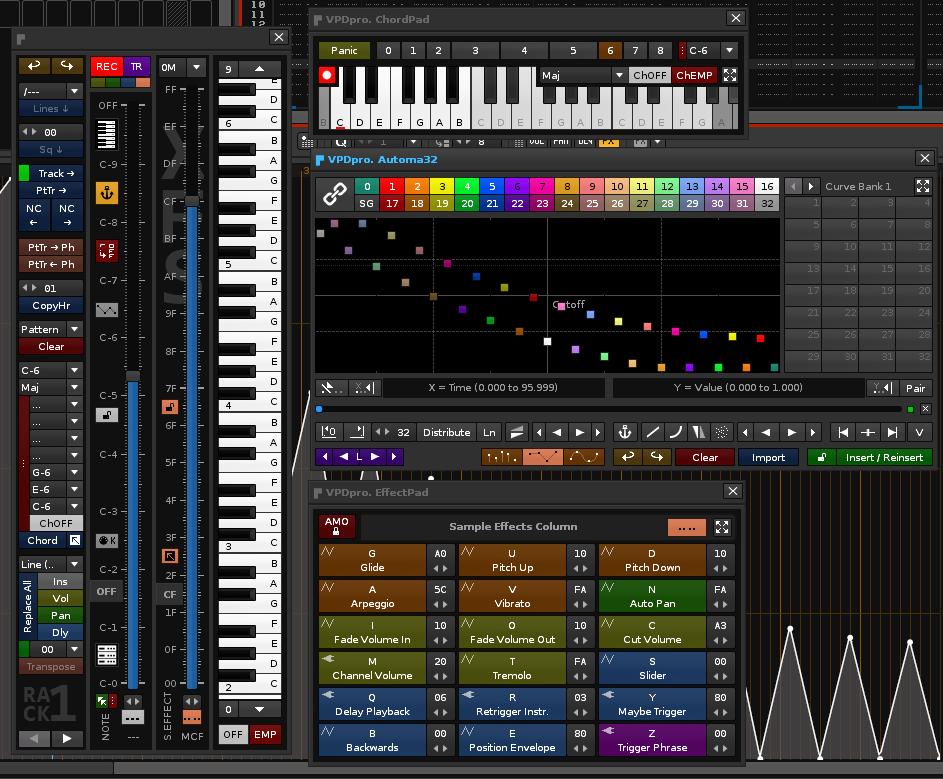 Finally, there will be four windows plus a fifth window to facilitate control of the MIDI input. 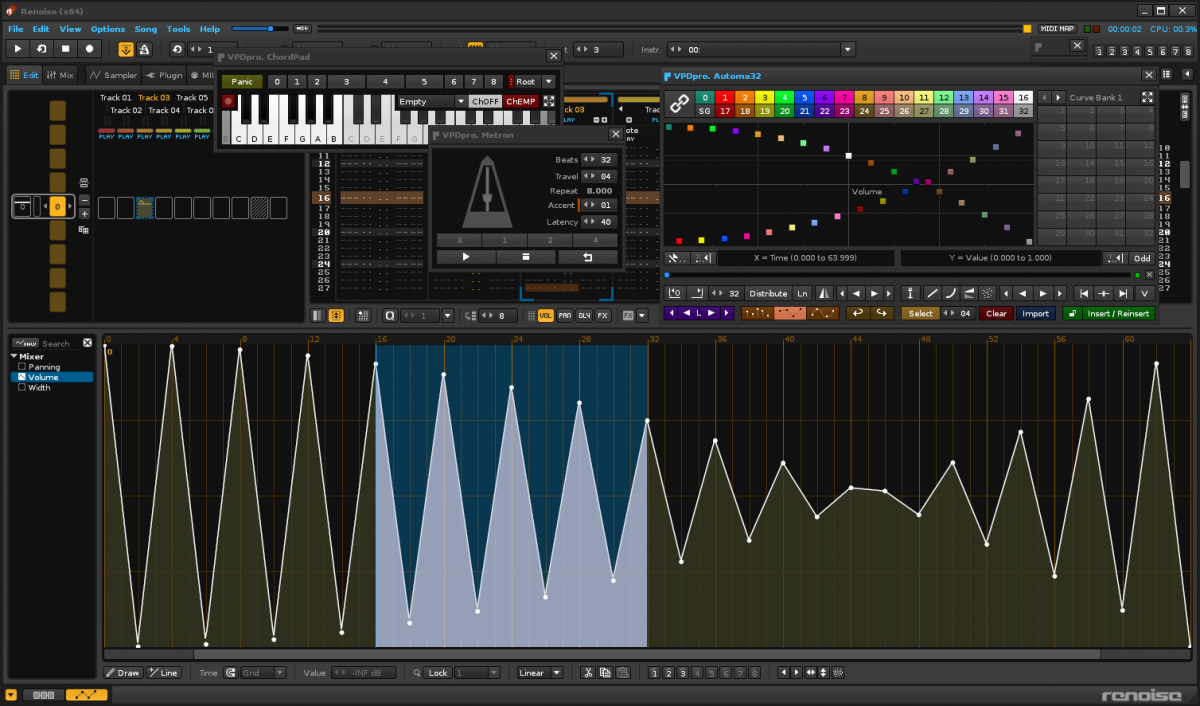 This envelope is formed by two equal crossed curves.Imagine using a filter or pitch parameter with this envelope.

In addition, I have added the selection by blocks for the automation editor.The selection that shows the image is made from the Automa32 tool.