Gives fine control nudge buttons for the renoise track delays with the bonus of working on group tracks and nudging all the sub-tracks by the selected amount. 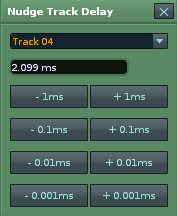 Thank you so much Ledger for your effort, I’ll try this weekend, seems very promising and handy

I should put this up on the Tools site, just need to fix the 100ms issue mentioned.

Also as bonus if you find you’re in need of nudging Send Tracks ahead of time aswell, say to get the reverb to hit before the source sound, it can be done with the delay parameter on DMGs free Track Control plug:

Need to sign up to download, but a freebie worth having IMO! It includes a nice trick of mid-side signal panning too. 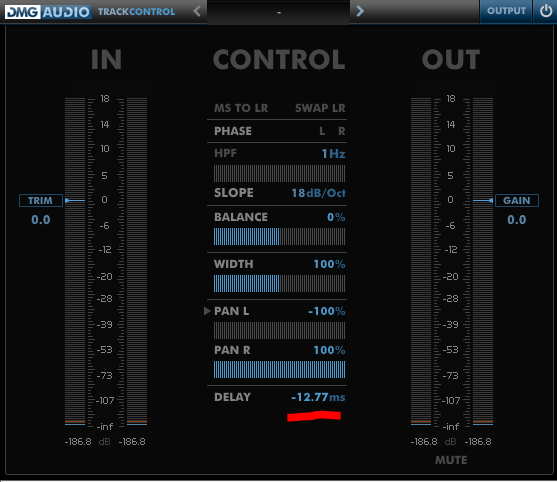 Hi Ledger, as i promise i’ve tested your tool and its very handy; perfect for find a right groove or for phase correction (with some oscilloscope

).
Honestly it should be included on Renoise.

Honestly it should be included on Renoise.

IMO, even having Ctrl + Shift to nudge 0.01ms in the native valuebox would be a nice improvement (Ctrl on its own currently allowing 0.1ms)

Or there’s always going full Bitwig, with their Time Shift device allowing down to single sample nudges! Even better for those phase fixes!

Now added a second readout showing roughly how many samples are being delayed by. Cannot guarantee perfect accuracy due to rounding errors vs renoise internal, but should be pretty close:

[-] button opens a new sub window where you can provide the songs current sample rate to the tool, default calculates for 44100 Hz: The tool will remember any new value you give it though.

The output is tagged as (Avg.) 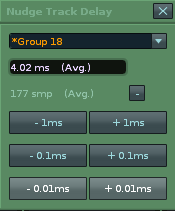 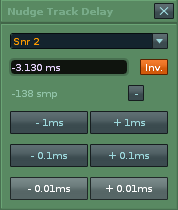 Added an [Inv.] button which inverts the tracks polarity. Useful as nudging delays will effect the phase of your track relative to other tracks and polarity inversion can help correct issues caused by this. A custom renoise gainer called “Polarity Flipped” will show up in the mixer when [Inv.] is active.

Also: The Inv. polarity gainers will show up the same and can be controlled in conjunction by this tool: