This has happened in the past but magically resolved itself , now it happened again.
Certain plugins ( Talmod ,Tal bassline , PLogue ops7 ) load extremely slowly , the gui of renoise is unresponsive when the plugin controls are tweaked.
Closing the plugin window casues the same issue , some plugins ( tall bassline 101 ) show a high activity in the windows cpu meter when the gui is shown .
I have no idea if this is a windows thing but Renoise is the only program affected by it .

Check Renoise preferences and make some changes and see if it helps.Here is my preferences.Maybe try moving your vst folder outside the windows drive,that could make a huge difference 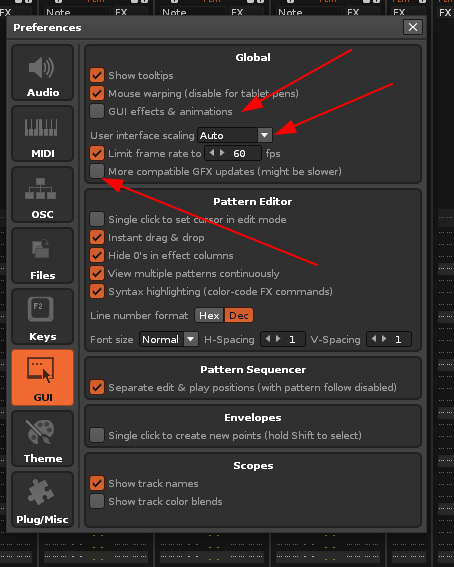 Did you disable and then enable sandboxing maybe?

I had some similar issues with ozone elements, but the processing works even if gui is quite unusable… This came back and forth and I found no way to resolve it… For now it’s working fine !
I stay tuned on this thread

The issue magically resolved itself but is now back again .
Affected plugins that load incredibly slow are plogue ops 7 , talmod and tal bassline .
Recording in the pattern editor ( realtime from keyboard ) becomes stuttery after a while
Loading the exact same plugins in other host are perfectly fine , fast gui loading etc.
This has to be a combined renoise -windows issue

Just playing a sample , real time recording (from pc keybaord ) becomes laggy and unusable , no vst’s loaded at all .
When real recording from pc keyboard , cpu in takmanager goes berserk resulting in laggy behaviour , so perhaps it’s a combination of keyboard input etc
I disabled windows defender , no luck .
It’s pretty f…ed up , and if only I knew which process to kill in taskmanger .

About the propossed gui effects options , yeah I’ve been doing that ever since
NO sandboxing , all 64 bit plugs

I really want to get to the bottom of this

Maybe something with powermanagement in windows wrong?

It’s a desktop pc , no power management enabled at all

Try select direct sound as sound output? (Have helped me when my arturia audiofuse messed up, heavy cpu usage and slowness. Which was solved after a complete deep uninstall of its drivers and then reinstalling)

It’s most def. not a driver issue
Anyway , as expected everything is back to normal after a few hours of not touching the pc
I can live with this if it only happens once a month , but not every few days …

An yup , it happened again
Slow loading of vst guis , stuttering and inaccurate capture of notes while recording from pc keybaord etc.
So the time interval is less then a weak .
This is getting so frustrating , especially since Renoise is the only program that is affected
Almost sure it is graphics card related ( stuttering scrolling issues when recording , vst guis’s etc…)

Change your audio settings maybe, but i think this is a problem by the scaling in your monitor.Have windows scaling to default and in your monitor and see if that helps

Done all that , it’s not an audio issue but a graphics issue where renoise uses a lot of cpu ( idling ) when displaying and interacting with ( certain ) vst’s .
Just turning a knob on a vst shows an increase in cpu usage to very high ( task manager )
As soon as there are multiple notes on the screen renoise becomes sluggish ,whcih makes real time recording ubusable at the moment .

Listen download a previous Renoise version and see if you have the same problems.Maybe reinstalling the current version might help too

Dona ll that , I have three different versons of renoise on my pc
3.1 , 3.3 and another one

Strange behavior .Are you sure that you have the chipset drivers for your motherboard installed correctly also your graphics card drivers?Go to device manager and see if everything is installed

There’s a problem, so I assume you’re working on Windows 10. Windows 10 is always causing trouble, many incomprehensible blue screens and so on. Anyway, check you RAM. As you describe your problem it might be broken.

Seems unlikely , otherwise other hosts would be affected too and not just audioprograms
Had one blue screen in 5 years time , so win 10 is pretty stable
All my other hosts behave perfectly wel , vsti’s like talmod and plogue ops7 show up in a fraction of a second , in renoise it takes 10 seconds
So it’s def. renoise -win 10 related , probably some shitty win 10 process which only affects renoise

Who knows? I had a broken RAM which affected only one thing I was doing, everything else worked fine, so I wouldn’t exclude it even if it seems unlikely. The more you work with your computer the more likely is the slow down, that sounds suspicious. Let us know what caused the problem if you figured it out.

One blue screen in five years? You’re a lucky man. I’ve got blue screens every week on three different computers running with Win10, and no one knows why. Everything works fine and the systems are clean, but the blue screens keep on coming. I never had that issue with Win7.