[fixed 1.1.2] Redux not receiving keyboard events in Ardour and Reaper under Linux

I am aware that this has been discussed before, but I would like to bring this to your attention again, since it has been years now since Redux has been released:
Currently, Redux is still not really usable in Ardour and Reaper under Linux, since it does not receive keyboard focus. I know you last time said this is a problem with the host (Reaper back then), but it seems that the situation is not that simple: https://discourse.ardour.org/t/renoise-redux-not-receiving-key-events/88301. If I understand the Ardour developer correctly, then there does not seem to be a standard way for Linux plugins to handle keyboard focus (for some reason). Would it be possible to get into contact with Paul (Ardour) and Justin (Repaer) to discuss a way (standard or not) to handle this at least in their hosts? Once this is in place, other hosts might follow that implementation then, and you could even propose your way as a “standard” for Linux VST. I am sure that selling a product that does not work properly is also not in your interest, and I really hope that a solution for this can be found soon.

I think it also works in Waveform and (?) Bitwig.

Maybe they have better communication with those developers then. So it really just comes down to communicating this to Paul and Justin, which is great, because it means that nothing substantial is standing in the way of having Redux work in Ardour and Reaper! I hope this gets fixed very soon then.

@taktik, thanks for editing the title, but please be aware that the same issue is present in Reaper as well, it is not exclusive to Ardour! I edited the title again to reflect this correctly.

@taktik As a new Redux user, I hit this. I am using Mixbus as my DAW. I also verified, same problem appears in Ardour 5.12.

I can see that Redux is receiving key presses, because I see those ‘keyboard’ keys animated to be pressed, but nothing happens in Phrases-editor. And yes, it is in edit mode, and same operations done when running from carla work ok. I also recorded video of problem:

When I start Carla as plugin in Mixbus, and Redux in Carla, then it works, but seems to be very crashy, not usable.

i cai can chime in with mixbus and redux combo. I’ve made some project with redux, and saved it. Whenever i open that project and i open plugin - 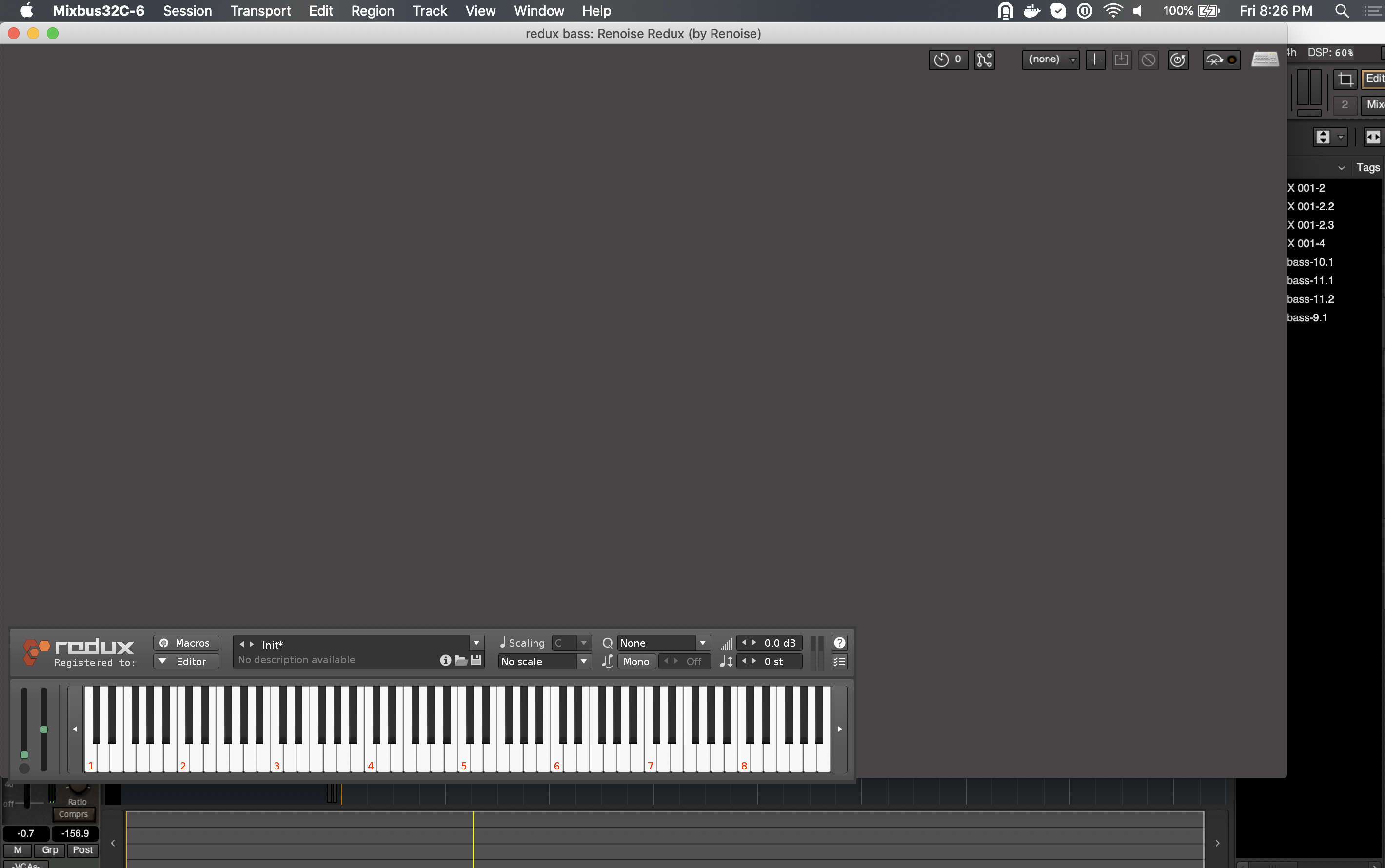 Seems silent here, should this be formally reported as a bug?

I can see that Redux is receiving key presses, because I see those ‘keyboard’ keys animated to be pressed, but nothing happens in Phrases-editor.

Is anyone successfully using Redux with Ardour on Linux? I can load the plugin, put it’s not possible to use the keyboard in the editor.

Hello, When the on-screen Redux keyboard keys are clicked, they show as such by becoming grey and a sound is made. When the computer keyboard is used, the corresponding on-screen key becomes grey, but no sound is heard. Seems (sounds) like a bug. Redux demo version, Linux Mint 17, Redux used as a plugin for Ardour. External MIDI keyboard works fine. Edit: As I follow along the Quick Start, the Esc and TAB keys do not work, to edit and move along columns, as they do in Renoise. I think it would…

Ok, thanks. So Ardour side is fixed, but still waiting for Redux to be fixed.

The “XEventProc” thing is now implemented in Ardour So I’ve tried implementing it in Redux ´too to check if it’s working, but it’s not. Not exactly sure why. I’ll need to build and debug Ardour from sources to find out more info here. This unfortunately will take a longer while. Basically, the reason why the keyboard in Redux is working in Carla, Renoise, Bitwig and Co, but not in Reaper and Ardour, is because the latter hosts are embedding the plugin window into child window frame. In ord…

So most likely this is somehow related to Renoise strange behaviour regarding keyboard. Keys that are bind in window manager do now work as expected when using Renoise (which is annoying)

Most likely that same code is causing problems here when Redux is embedded inside Ardour own plugin window, and it can’t see itself as ‘focused window’. Sounds like some change in X11 key event handling is needed.

I tried redux in the latest dev build of reaper and can play samples (enter phrases etc) with the computer keyboard when the editor window is open. Can’t remember if this was working before but i don’t think so.

It somehow only works in fluxbox not xfce, this is very strange.

I am running BitWig 3.2 on Linux and I’m having the same issue. Keys can only be used to play notes. Everything else doesn’t work. I faintly remember this working before, but I’m not sure what changed. I can get the keys to work in Carla, but as an earlier poster said, it crashes a lot.

I was just testing it in Bitwig 3.1 and it was working.

I used my package cache to test BitWig v3.1.2. It worked, indicating BitWig made some change in v3.2 that broke redux. I’ve contacted BitWig support and will update when I hear back.

I’m testing 3.1. at the moment with Debian. I get sporadic xruns, especially when using e.g. DIVA. This issue still prevents me from buying it.

I took at look at their changelog for v3.2

I bet this is causing the problem.

Yes, seems so. Right, I read this yesterday and forgot about it. Maybe write an email to the support team.

So Bitwig was the only host in which it worked correctly and now they explicitly changed that? Those people are hilarious.