Too help preserve some CPU cycles. Mutes all instrument columns and bypasses all fx.

Plus: Bypass Hydra Function in the instrument DSP menu.

Tracks aren’t fully muted and sends and groups will still allow sound to pass. It’s just all devices and notes will be bypassed.

If you have a device that you don’t want switched back on when using the tool, put it in a doofer and it will keep its bypassed state - For warning, tracks with any devices already off are marked with a [*] 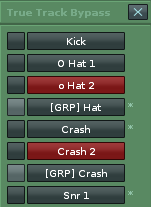 Great tool for diagnosing buggy projects. Thanks for this!

Ledger Always something for us to make our lives easier in Renoise.A million thanks for all your effort

@Ledger thank you so much, it’s so handy!
It would be great to be able to automate

The trouble with automation is the slower speed of Lua threads vs. the main audio engine in renoise. Possibly could be hacked using some flag/ dummy dsp device though.

My intent is to make the best use of the CPU (thus being able to reduce latency), automating would make everything easier. But this is not the main purpose

automating would make everything easier

I will have a look at it.

In mean time a new small update in first post

@Same_Freaky_Sound I’m thinking what your suggesting might be best achieved with a Hydra device i.e; set all of the targets of the device to the Bypass buttons of the track devices and simply automate the Hydra to set all on/ off

To fully cut the sound of the instrument playing, a gainer could be set up at the beginning of the track to inversely mute the track with the same automation; this would take up one of the 9 slots though.

This solution would mean you get the reliabilty of renoise’s own automation timing and don’t have to have a tool running in the background playing catch up.

Let me know what you think and I can try to do the Hydra part and add it to the DSP lane menu.

That’s exactly what I’m doing now, but there’s still room for improvement.
For example instrument FX are not easy to bypass; they can be mapped with macros, but with the limit of 8.
Anyway, thank you to take time to think about my suggestion, i really appreciate!

they can be mapped with macros, but with the limit of 8

Could you not use Hydras in the Inst. FX chains and link the Hydras to the Macros?

You can even daisy-chain Hydras together so you would have a ‘Master Hydra’ controlling as many others as you need for the same instrument (just make one of the targets from the Master Hydra, the Input of the next).

Then you can bypass all the DSPs in an instrument with one macro, linked to the Master hydra:

@Ledger sorry for the late replay, you’re totally right!
I don’t know if it’s worth it, anyway i’ll we try and I’ll let you know

Thank you so much!!!

Hi @Ledger, I tried and it worth; it’s a little bit tricky and need some extra time to setup but it worth.
It would be great to have “auto suspend” also for native FX.

It would be great to have “auto suspend” also for native FX.

What I was mentioning before was not really an auto suspend, but a menu to auto-add and route the hydras in the instrument DSPs. It looks in the API like Macro mappings are read-only so can’t be set by a script, so you would need to still do that yourself and then automate the macro in pattern as normal.

It would just save all the hydra routing donkey work. This still useful for you?

Yes Ledger, I know that I have to do manually and its more then useful!
I think the “automatic suspend” for native FX, should “native encoded”; so I’m sorry for messing around

@Same_Freaky_Sound , I added the functionality to the right-click, inst dsp menu Set Up Bypass Hydra(s) . Once run just map the ‘BP Hydra’ to whichever macro you want to control on/off for all devices.

Note: If you run it a second time on same instrument, it clears and re-adds the Hydra Bypass chain, so you will have to reset the macro mapping (i.e. you added more DSPs/ are testing)

let me know how you get on. 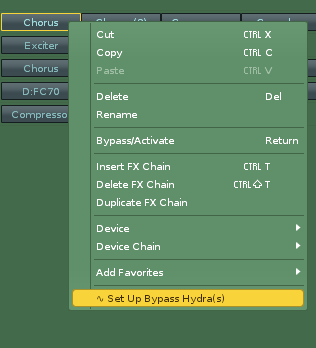 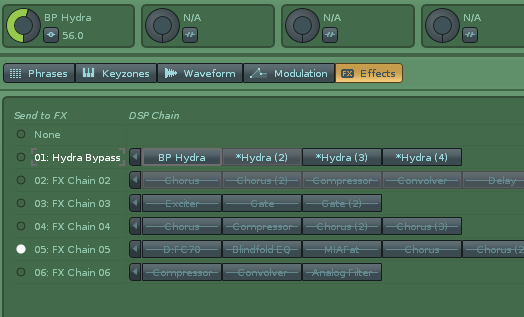 Thank you so much, i’ll test asap!

Hi @Ledger, just tested the 0.57 version and work perfect for my setup.
Thank you so much for your effort!

Should save some time, painfully routing those Hydras; Plus it’s actually quite a nice feature to have with the tool.