The envelope and it's quirks

I spend ages recreating a sound in the insstrument editor and I just wasn’t able to do it .

The sound was fairly simple ,a fast filter attack of about 7ms from minimum to max and a fast decay from max to almost zero …about 10 ms .

The filter attack/decay of the original sound defined the overall character , aware of the fact that every filter has a different scaling / character , I did’t expect renoise filters to sound the same , but I assumed that the envelope would at least be able to achieve the same contour .

I used the points envelope set to time mode , because in essence all the other envelopes are simplified point envelopes (under the hood) .

The filters were never able to reach their full cut off point , when using the envelope .

during a hold period of 20 ms., the filter isn’t going to it’s maximum value (fully opened ).

For short/ high range env.modulations , the envelop alone is not enough to achieve this , it has be used with an operator for further upward scaling .

But this is no solution either .

We have a envelope with fast changes (range below 30 ms) and wide mod.range , and some parts of the envelope with relatively slow changes and medium mod.depth .

By inserting an operator afterwards , the scaling is also applied to those (slow/moderate) sections of the envelope that were accurate and are now extended beyond their intended reach ; so

we manually have to adjust all the sections that don’t need scaling …which makes it well …not pleasant to work with .

To make things worse , when are there are many repeating fast changes ( spike shaped) …inserting muliple scaling operators is sometimes necessary

I know that the envelope is tempo dependent ,but the difference is huge ;

It might as well be a combination of the tempo dependent behaviour of the envelopes and the iterpolation of points and filter cut off smoothing …which I suspect is a standard 20 ms ’ in the instr.editor ), I am aware that a certain degree of smoothing is necessary to avoid clicks

Bottom line is , even when the envelope appears to be at full max range , the number of points and the time span of this max range will decide whether the envelope will output max values .

Some might say that 20ms is way to short to be noticeable etc, but it’s not …applied to filter cut off , a short full range attack has a noticeable impact .

I don’t know if this is even remotely possible for future versions , but an instr.envelope that operates at the global sample rate would be awesome , independant from tpl and bpm … (altough syncing would be nice )

Were we don’t have rely on the nr.of ( neighbouring) points to create full max .fast changes .

It spits out what you enter , sample accurate , for zap zap bassdrums and yadie yadie etc …

In other words , what you see is what you get , Would it be possible in the future for a more streamlined accuate envelope , without the kwerks

Yes , I know I am a pita and never ever satisfied .

But that doesn’t mean you have to ignore my posts , ( sad sad kitten here )

We’re not ignoring anything in this forum, but it’s hard to give you a concrete answer here. Would your request of an improved envelope be useful? Of course it would be! When will it come - if at all? No one can answer you that question, especially not at the end of a release where we unfortunately can’t address such things.

Really would love to see this happening in the next version .

Since the filters are now of a reasonably good quality , it’s sad the envelopes can not take full advantage of those .

I’m gonna be nasty and bump this thread .

Would really like to know if the envelopes will get an update , they show their weakness when doing fast attack/decays .

I feel like bumping this one , been unable to recreate patches because of the envelope limitation ( see above ) .

fastest exponential decay with envelope fader operator , from max freq. of the ring mod ( 7900 hertz ) ( using dc sample as an impulse ) , is impossible .

And that’s not because the changes are too fast , it’s simply because of renoise’s limitations .

I think it is not fault of the modulation envelopes themselves.

I normally work with the fader devices for the tighter stuff, chaining some of them to achieve the wanted envelope.

Rendering a dc sample through a volume envelope built from faders with 7ms attack and 10ms decay yielded a nice little ramp with slight bends, not totally perfect in shape but topping 1.0 in the expected times. With a linear envelope, the curve was a bit different but still in check considering the tight timing.

But testing this with filters with very high reso, the top freqs weren’t reached like you described. So I believe the filter (and rm also) freqs are smoothed/lagged in some way, preventing them to reach the target for very fast modulations. The volume for example seems to be more direct in action.

For stuff like you reported here you’d need a filter with audio rate, or even better subsample accuracy, decoupled cutoff and reso modulation to sound real cool. I guess renoise’s filters aren’t at that level yet considering all the other Kinderkrankheiten they have yet revealed. You might rather want to sample a vst that is capable of such tight filter action for your work.

It is just blips and zaps after all, sample a dozen times a dozen of them, put then in a bag, shake, and place them into the pattern editor sorted by timbre. Your timing values make cool hihat/shaker like blips and zaps depending on the audio put through the filter, thanks for the idea!

Well I think it is , because the fader env or the the standard envelope are essentialy the same …just a different appearance.

It’s not just for blips and bloops , …and we certainly don’t need a filter that operates at S.R. …a few ms would be more then enough …there will always be some smoothing .

If you look at my post from 27 january ( max not reached ) …there is a 300 ms time lapse in between the modulations , and the filter is not able to recover back to it’s initial maximum value ?

As soon as there are multiple ( fast exp.) decaying stages in an envelope , it shows it weakness.

Like I have described earlier …I wasn’t able to recreate certain patches because it required a 5 ms env .attack to reach full cutoff …ANy other synth I have does it , nord modular , reaktor , hell even my sampler does it .

Bottom line , renoise envelopes are ( to ) slow and need an overhaul …this is essentially the only thing that bothers me .

But they do the" job for most things .

A nice envelope with tension curves , freely adjustable , fast …bring it on

i’ve been testing a bit your envelope whoes, both DC/saw/square, amp&filt…

if you create another point before the initial 1 value at 0 the filter behaviour ‘not reaching 1’ occurs also. it always happens with very fast extreme changes and i bet the instrument filters are indeed smoothed.

with amp i have same observations as OopslFly, slight kink near the top of peak in result. but nothing dramatic to me.

the envelopes never where renoise forte imho (esp the freely drawable ones), but they do the job for most things… and you mention Reaktor envelopes, i think NI has one of the best bread and butter envs in all their products. And there are a bunch of vst/au around with worse envelopes then renoise imho

out of curiousity, what sounds are you trying to achieve?

out of curiousity, what sounds are you trying to achieve?

It’s a verry simple simple sound , a few detuned squares +lp filtering …a bit of kbd tracking …but the attack stage just doesn’t do it …and yes …sure the filter sounds different …

I nailed the sound in almost every other plugin .

I only have linux/osx machines and atm on holiday but i think i know what you’re after. (tried to compile SQ8L as dssi once but it was a major pain)

TBH i was a bit disappointed when trying to recreate sounds from zebra&diva some time ago, but those have either s-curve/exp env’s or more organic/analog sounding env’s. After building a system on steroids i just gave up trying to recreate those in Renoise. But i agree, the env’s are not the fastest and maybe not the most musical ones…

(on the other hand i think it will be a major task to get them really fast in combination with instr filters, spline-able (true curves), with options for analog randomness etc…)

And I think it has nothing to do with the filters being to slow , the reason why I used the filters to exhibit the slow envelope behaviour is because it is easy to see on the spectrum analyzer , as with the ring mod .

After some experiments i ve got feeling that this is one of the most important updates that should be done.

This would be great for the new Renoise Update! 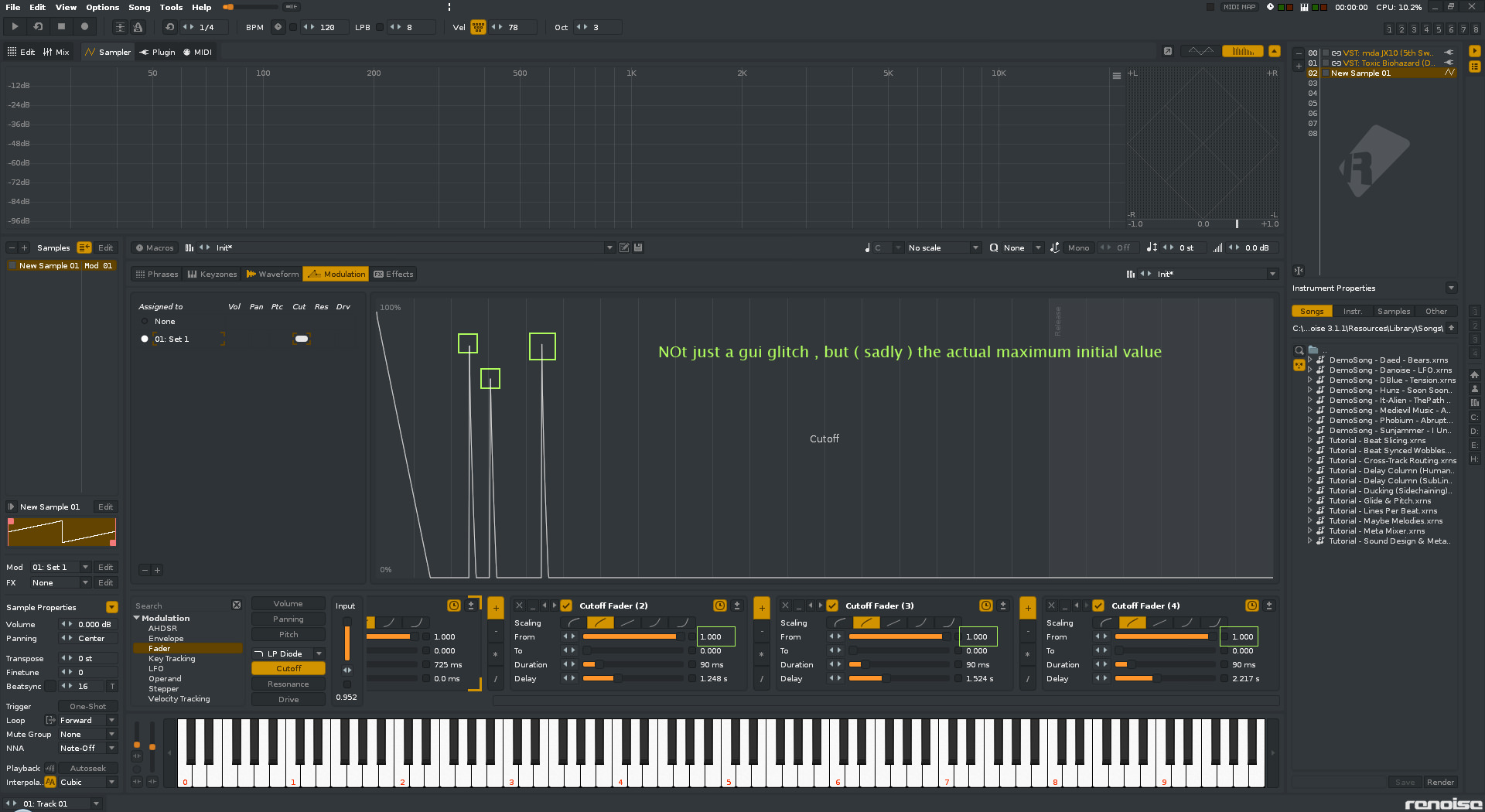 And while we’re at it , get rid of the 2ms linear interpolation that occurs during the transient phase of the added envelopes …

Doesn’t matter if these are decaying operators or envelopes .