Recent weeks, I’ve been trying to make a GURU synth-definition file for a cheep japanese gadget called “Pocket Miku”.
It includes the YAMAHA’s NSX-1 chip, which has an eVocaloid and GM instruments (with XG effects).

During making it, I feel its a pity that Renoise cannot control GURU by the automation.
In NSX-1, the lyrics of Miku are treated as SysEx, but Renoise cannot send SysEx in it’s sequencer, so I have to send SysEx manually from GURU-panel.

Well, Miku is a bit funny example though :rolleyes: , I think it’s better if Renoise can send SysEx (and RPN, NRPN) and control them by the automation natively.
Simply, it’s the best if Renoise can control all GURU parameters by the automation, but it’s hard to implement technically, isn’t it?
So I imagine something like “micro GURU device”, which can send only 1 SysEx message like the image below.

Ofcourse it’s good if it has 8 parameters like the Doofers, but maybe it will be too complicated (?), so I suggest 1 parameter only anyway.

I think i would actually ejaculate if this was implemented

I think it’s better if Renoise can send SysEx (and RPN, NRPN) and control them by the automation natively.

I like the sysex thing. Sysexxy. But RPN and NRPN doesn’t really belong here, IMO - it’s like mixing apples and oranges.

I like the sysex thing. Sysexxy. But RPN and NRPN doesn’t really belong here, IMO - it’s like mixing apples and oranges.

Makes a nice fruit salad though.

Was looking for a solution and came across this suggestion! 10/10 please implement

I’ve been looking for an easy way to send sysex in the sequencer for ages now. I would gladly be willing to pay something for a plugin such as this.

Yes! Anyone who uses external sound devices could really use this.

Ableton doesnt even supprt sysex, this could be a selling point for renoise!

Especailly as we already have a load of people with solid guru patches, we could bundle 20-30 synth patch editors in with the daw.

old FM-Synths are cheap and sounds better as Vst-Instruments, they are popular by Chiptunes Tracker Friends

This is such a great idea - but until then this one actually works:-)

Any news on this? Sysex support was already implemented in Octamed back in the 90s. It’s weird that in 2020 Renoise still doesn’t support this! Even worse: Sysex Librarian, the plugin for Renoise, doesn’t work anymore in version 3.2.1.

There is MIDI Yoke + MIDI Ox which may help.
Thing with Sysex is… it is not a standard.

Every company implements sysex the way they
want to implement it as in ‘System Exclusive’,
meaning the commands are specific to the
single device.

Others have gone through the trouble of
pre-mapping sysex for several old vintage
synths and you can find sysex libraries
on the web to do this.

Moving forward, with new hardware, we
may want to look ahead to midi 2.0.

OK, thanks for your input.

Adding a basic midi message editor where one can build his own midi message (and therefore also a sysex message) and then trigger that sysex message from the pattern editor, can be a pretty standard and flexible implementation. Extra advantage of such a function above using an external piece of software is that one can keep its song structure including midi messages within a single song / file avoiding clutter.

See the screenshots below, that’s how they did that in the 90s… one builds a midi / sysex message which can be triggered as a command in the pattern editor. Revamp it to a 20s UI with some additional functions and you’re done. I used this function in my songs to control things like reverbs of sound modules, sound parameters of synths in a dymanic way (making changes during a song, not just set once and forget).

I understand that coding software and designing interfacing is something one should not think too light of… and all respect to the Renoise developers. But adding such a thing would stimulate including outboard gear in Renoise setups much more I believe. 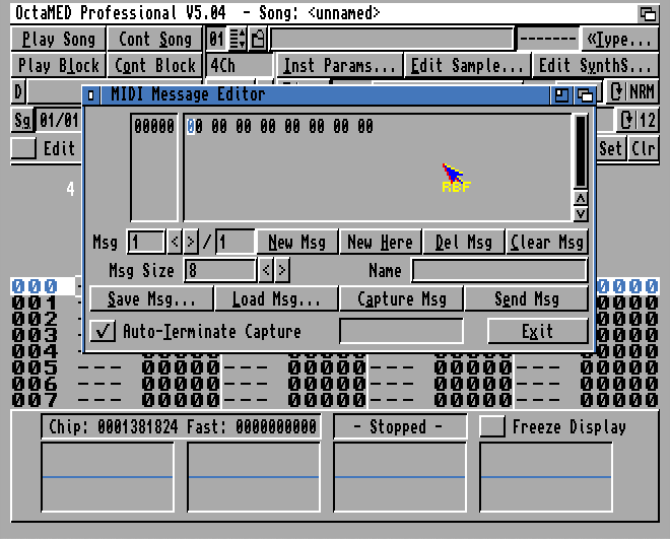 Triggering a midi message that was made in the editor:

Bumping this thread to say that I would love to see this feature implemented in Renoise! I frequently work with old MIDI hardware, including a Roland JV-1080, which requires sysex messages to externally modify functions such EFX type & parameters, voice reserves, tempo, tuning, LFOs, and filter envelopes. Sysex can also be used to create and modify patches on the fly.

So, adding a method of making sysex insertions directly in Renoise would allow me to take full control of the features in my gear and create far more complex projects with the software.

Like the previous reply suggested, I think an implementation similar to that of OctaMED would work very well for Renoise. Being able to insert a command to trigger a sysex message at any point in the pattern is exactly what I’m looking for.