This tool works exactly like the native ‘Render To Sample’ function but goes one step further and slices the resulting sample based on where the note positions are in the source tracks.

For example if you have 4x4 drum beat and use this tool it will render the sample and insert 4 slices, one on every beat.

Optionally, the tool will also create a new track with the slice pattern data on it, so that it can be played back like the original source.

-Similar to ‘Render To Sample’ highlight a range in the pattern editor over a single track or multiple tracks.

-The rendered output will be sliced based on the note positions in the selected source range.

-A new track will also be created to the right of the range and the slice pattern data will be written to that, playback of this track will match the source material. You can disable this creation of a new track as a default behaviour in the Tools menu under ‘Render and Slice’.

If you want to render multiple track but only slice based on the note data of some of the tracks then you can use mute and solo in the mixer to specify this as the tool will ignore slice data from muted tracks. 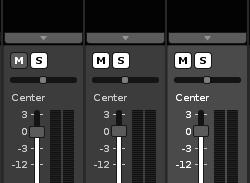 With mixer settings like this, the audio will be rendered from all 3 tracks, but the slices will only be based on the note data from the first (unmuted) track.

In the tools menu you can set:

Also thanks to Djeroek for helping out with this.

Don’t sleep on this people, wicked tool for in track freezing, auto-placing the renders inside the pattern.

Made a quick lill demo, automating fx, rendering the result in a sliced instrument, re-shuffling the notes in another pattern and automate more dsp on top - rinse and repeat.

This is fantastic, thank you very much. Great demo as well.

Looks quite interesting, thanks guys!

That demo is very cool Djeroek, slick chops and I like how the DSP automations build up… shows a good use of the tool, doing that level of slicing manually would take ages!

Useful to me beyond explanation.

‘C:\Users\plugexpert\AppData\Roaming\Renoise\V3.0.1\Scripts\Tools\com.afta8.RenderAndSlice.xrnx\main.lua’ failed in one of its notifiers.

trying to render a track with 2 command rows, 120 line pattern length, though it rendered without problems before in the same song. There is a rendered sample result, but it isn’t sliced and put in a the render & slice track.

… I wanted to say that i´ve needed this for a long time and i thank you so much but then i´ve realized that it doesnt work for matrix editor but pattern editor. But it is still cool

Added option to create phrases from pattern data, see the tools menu to make the setting (on by default)

With this option set, the rendering and slicing will happen as usual, however for each note where a slice would usually be triggered it will trigger a phrase which starts with that slice note but then goes on to play the rest of the pattern data from there.

I could explain it better but just try it out and look at the phrase data and this will make more sense.

this tool is so good!

…can’t wait for the new Renoise to drop so my disneyland magic feature request can make it inside the tool. An option to render and replace the source selection, automatically muting used dsp track fx for the duration of the selection so it’ll be a seamless transition from original to bounced. Afaik currently not really possible without workaround hacks, not having the active/bypassed parameter available to control through lua,

It seems i never need to worry about tools and features because afta8 has already made a tool for it.

I have a suggestion to make this even more useful (or maybe for another tool): When i autoslice a sample the beats are all over the place and it’s hopelessly tedious to try and fit those slices into a pattern. If there was a function that distributes the already sliced sample to a pattern so that it plays like the original, it would be a lot more convenient.

Check out my Slices to Pattern tool. Link in my sig below.

Check out my Slices to Pattern tool. Link in my sig below.

I actually already had a like on your tool, but i must have forgotten about it.

@afta8: you are the boss. Thank you so much for all of the awesome tools and functionality you add to an already great program!!!

This one isn’t auto updated correctly in 3.1 because of changes under the hood I guess, but you can manually update the manifest to 5 in the scripting terminal to get it working somewhat.

Although I get a result using the tool, the terminal gives the following notice;

*** std::runtime_error: ‘internal error. failed to resolve a phrase mapping for a phrase.’

Would be great to have this tool in full effect for 3.1

, even better after some pimping now that this is addressed;https://forum.renoise.com/t/how-to-write-device-active-bypass-state-to-automation/43116 ?

For now, disable the ‘Write phrases to instrument’ setting in the tools menu, this will stop the error message coming up. The way phrases are done seems to have been overhauled so need to get my head around all that, maybe change the way it is done given new features etc…

And yes extra pimping is also on the cards